For more information about Viscount Tredegar - Godfrey Morgan, click here for Steffan Ellis's blog post.
Tag Archives: Godfrey Morgan.
Newport Rugby Club can trace its origins to Newport Victoria Cricket Club, which played on the marshes in what is now an area stretching from Wyndham Street to Shaftesbury Park. In September 1874, younger members of the cricket club, including the sons of Thomas Phillips of Phillips Brewing Company, met at the Dock Road Brewery to establish a football club. The club was originally intended to be an Association Football (soccer) club. This was problematic, as there was a lack of soccer fixtures and opponents to play. In light of this, rugby was chosen. Richard Mullock and Edward Bellerby were elected as joint secretaries. Mullock went on to help establish the Welsh Rugby Union. Newport’s first game was played on April 3rd 1875 against Glamorgan. The Club played on the marshes until 1877 when Lord Tredegar was approached and an area known as Clarke’s Garden was acquired. The area was levelled and on 24th May, the Newport Athletic club was created. A grandstand, playing-field, cricket pavilion and gymnasium were built in the area in front of where the present clubhouse stands on Rodney Parade. In 1892, the site was extended and a former salt pool was acquired. The pool was drained and flattened and the rugby field moved to its present location. The original rugby field was encircled with a cycling track and the athletic club became one of the largest and most successful in the country. Many famous players and teams have graced this site. Welsh international matches were staged on five occasions.
(Copied from the displays at the Newport Exhibition - see below 140 Years of Newport RFC)
Rodney Parade is a stadium in the city of Newport. It is the second oldest sports venue used in the Football League, after Deepdale, Preston. Rodney Parade was opened in 1877 – two years after the creation of Newport Athletic Club and following the land being secured from Godfrey Morgan, 1st Viscount Tredegar. At that time it was home to cricket, tennis, athletics and rugby.
In October 1879 Newport RFC played Cardiff RFC in a floodlit game at Rodney Parade and it was the first ground to have floodlights installed in Wales. Newport rugby club enjoyed highly successful seasons, having been unbeaten for six consecutive seasons. Rodney Parade is located on the east bank of the River Usk and is a short walk to the the ground is a short walk from the city centre via Newport Bridge or the newer Newport City Foot Bridge.  On match days it is possible to see crowds of Black and Amber fans walking to the match in anticipation of a win, The footbridge has made a difference because it leads directly from Newport centre and has no traffic. 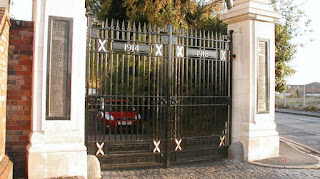 THE MEMORIAL gates at Rodney Parade were granted Grade Two Listed Building status by Cadw in 2020.The gates were built in 1923 to pay tribute to the members of Newport Athletic Club who died during the First World War. They were unveiled by Lord Tredegar on September 5 1923. There are eighty-six names on the bronze plaques on the gate posts.
2. The early years of Rugby

From the start in 1874, Newport RFC quickly established themselves as the top team in Wales. In the first four seasons under the leadership of  William Phillips Newport won all of their fixtures, playing 59 games, kicking 87 goals and scoring 148 tries, with only two goals and eight tries conceded. Challenges were thrown down to clubs outside of Wales. The most famous club in England – Blackheath, was invited to play at Rodney Parade in November 1879. This game was to end Newport’s invincibility. Newport were beaten by eight goals and four tries to nothing. The creation of a national team and the Welsh Rugby Union can be traced back to this game. Newport learnt from the Blackheath defeat, gaining lots of match play and learning to adapt their game against a wide variety of opponents. They would come back much stronger. The 1891-92 season was the start of the greatest period in the Club’s history. Newport were undefeated for the whole of that season and by 1897 had played 170 matches, winning 143, drawing 14 and only losing 13. It was a period of great captains, great play and great success. Never again have Newport had such a galaxy of great players. Newport RFC’s fame spread far and wide thanks to this fantastic team. In 1922-23 led by their magnificent forwards, Newport went through a season undefeated for the sixth time under the captaincy of  Jack Wetter.

Here are some photographs which have been deposited in Newport Museum and Art Gallery as part of the collection. Arranged in date order - from box 4. 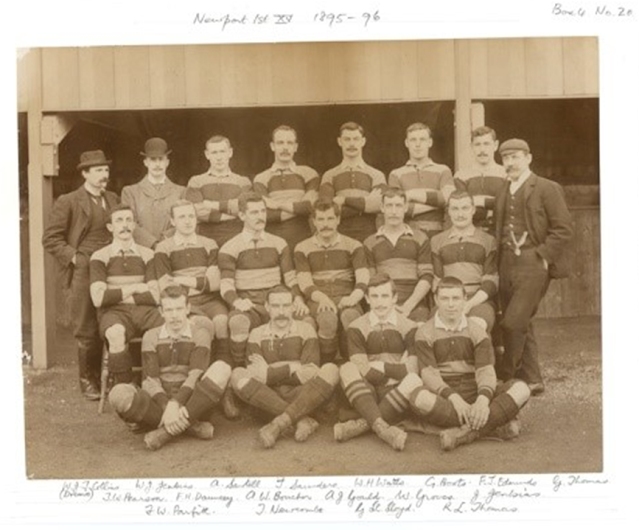 Into the new Millennium

Following the introduction of regional rugby union teams in Wales the Newport Gwent Dragons regional team was formed on 1 April 2003 and shared Rodney Parade with Newport RFC from then onwards. On 4 September 2007, it was announced that the Rodney Parade site was due to be redeveloped into a 15,000-capacity stadium by the beginning of the 2010–11 rugby union season. The redevelopment was backed by Newport City Council, Newport Unlimited,  Newport RFC and Newport Gwent Dragons. The application received planning consent on 11 March 2009. The plan included construction of covered stands at the north and south ends and the provision of cover on the stretch of the west touchline terrace. In August 2010, it was announced that the target finish date for the first phase had been put back to the beginning of the 2011–12 rugby union season with the full redevelopment planned to take several years. The new east stand was opened in October 2011, and named the Bisley Stand for sponsorship purposes.

In May 2012, it was agreed that Newport County football club would move from Newport Stadium and play its home fixtures at Rodney Parade as part of an initial three-year deal, meaning that the stadium would host association football matches on a regular basis for the first time. In February 2013, Newport County agreed a further 10-year lease to play at Rodney Parade.

In the summers of 2013 and 2014, new drainage and irrigation systems were installed under the grass playing surface but despite that, serious drainage problems occurred at the end of 2016. Newport County's matches against Barnet on 3 September and Morercombe on 10 December were abandoned at half-time because the pitch was waterlogged and the English Football League stepped in to help identify the problem.

In March 2017, sale of the ground to the Welsh Rugby Union was agreed following a vote of Newport RFC shareholders. The takeover was completed on 27 June 2017 and work started to install a hybrid grass pitch for the 2017–18 rugby and football season.

See a blog written just before lockdown: click On the banks of the River Usk - a day in Newport

23 Feb 2020 by johndewhirst a football supporter from Bradford

Click to see The Bridges of Newport with reference to the Black and Amber,  by Geraint Chapman 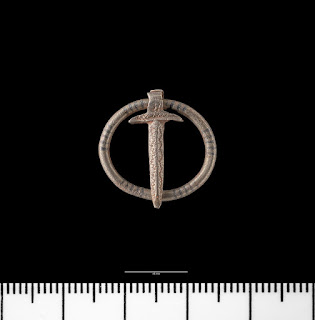 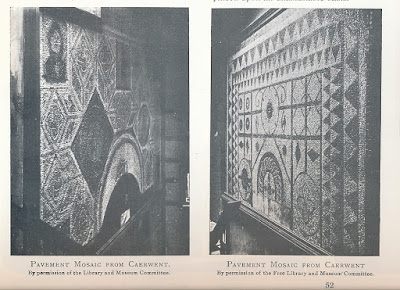