Josef Herman, 'Women in the Fields' 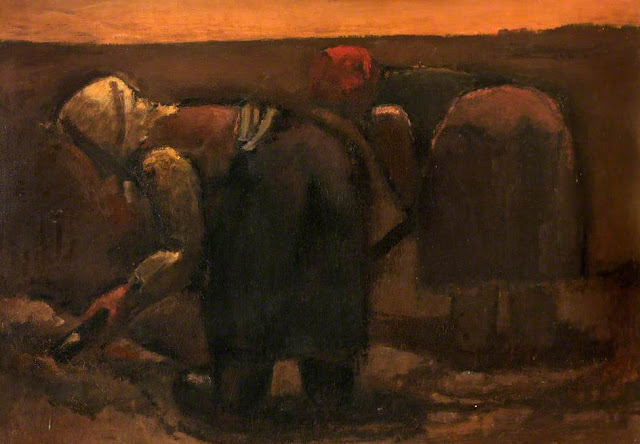 I first became aware of Josef Herman while studying fine art at the University of Dundee in 2006. At the time, I was experimenting with ink, drawing industrial buildings when a lecturer suggested looking at Herman’s graphic works. Herman’s confident line, either in charcoal or ink displayed an immediacy to record while simultaneously expressing the artist’s internalised encounter with his subject. The works Herman made while living in the mining community at Yystradgynlais were of particular interest.

I first encountered Women in the Fields after a re-hang of the permanent collection at Newport Museum and Art Gallery. The work made an immediate impression, and it sounds strange, but one way I believe the effectiveness of a work of art can be measured is its potential to persist while your back is turned to it. Women in the Fields persisted through the exaggerated monumental female figures arched over, bearing the weight and bowed horizon of the desolate agricultural landscape, but somehow resisting it. The women also possess a similar gravitas of an exaggerated figure by Picasso. The landscape has the raw earthiness of an early Van Gogh. A painting by Jean-Francois Millet in the collection of the National Museum of Wales, Winter, The Faggot Gatherers also springs to mind.

However, the twilight-orange light emanating from Women in the Fields is what makes its presence felt most. The combination of masterful paint handling, glaze and monumentality of the figures in contrast to the soft and considered light is what ties the work together. The artist who came foremost to my mind when looking at this work was Mark Rothko and in particular his painting in Detroit Instiitute of Arts, Orange, Brown, 1963. Both Rothko and Herman highlight that regardless if a work is figurative or abstract, colour possesses the power to communicate directly, even while your back is turned.