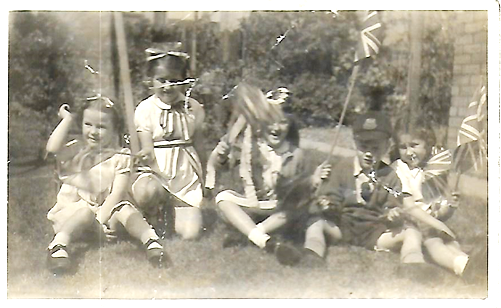 There are many photographs which show how people in Britain celebrated VE Day. Winston Churchill addressed the crowds from the Ministry of Health building in Whitehall. The King and Queen came out onto the balcony at Buckingham Palace to wave to the rejoicing people. There were to be many celebrations across Britain and, as well as civic official ceremonies, there were street parties and family celebrations.

Life was to change after the war and just as we are faced with coming out of lock-down, so the British government had to reduce the wartime restrictions and controls and these could not be dropped instantly. After the war Winston Churchill and the Conservative Party lost the 1945 election. Clement Atlee's Labour government had to find ways of gradually phasing out government controls. In 1951 Churchill was once again PM but food rationing did not finally end util 1954. One of my memories is of sweet rationing which ended in 1953 and I would go to the corner shop to buy Uncle Dick's lollipops which were so dangerously large that you had to force them into the mouth and you could not speak until you has sucked them to a sensible size.

Above is picture taken on VE Day and it shows a group of children on the lawn of my sister-in-law's house on the day of a street party. Memory is a strange thing and my sister-in-law, second from the left, thought she could remember the event well. She thought she was an only child then, but her brother was actually nine months old. She remembered two boys in the photograph but when she eventually found it after searching for days, there was only one. Despite the cracks in the faded photograph one can see the children, four little girls and one boy, waving flags for the camera.

My sister-in-law is in a white dress and has red, white and blue ribbons around her waist and in her hair. The next girl or her right has a knitted tam o'shanter on her head which was also red white and blue. The little boy is dressed as boys were then, formally in a shirt and tie and he wears short trousers. He has a cap on his head possibly added for what was obviously an auspicious occasion.

These children waving their flags so patriotically were to be the fortunate post war generation about to benefit from the Education Act of 1944 and Atlee’s reforms which brought about the National Health Service. After the war the NHS tackled diseases such as diphtheria, tetanus, whooping cough and polio the latter reaching epidemic proportions. I well remember the fear this disease instilled in my mother's advice to a young child. The Union Jack flag, waved by the children, was also a symbol of an Empire which was soon to be disbanded. So many of the soldiers who died in the war were soldiers of the Empire. However, the war was not over on 8th May and VJ Day or Victory in Japan Day was still to come. Hopefully the planned 75th Commemorations will be able to take place on 15th August this year. 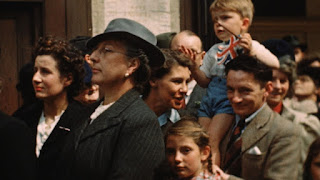 You can watch this amazing film of the celebrations in Newport which involved a huge march past civic dignitaries. It is in the collection of Newport Museum and Art Gallery.
https://player.bfi.org.uk/free/film/watch-ve-celebrations-at-newport-may-1945-1945-online
(Click then open this link in new window.)

A member has sent a picture from her photograph album of herself on VE Day aged 3 and wishes to remain anonymous. 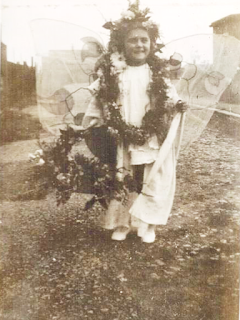