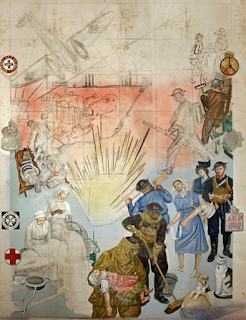 It can be amazing how related items are deposited in Museums and Art Galleries separately and by people who did not know each other and how together they tell a story.In the painting 'Home Front' which Stanley Lewis referred to as a mural, he has added information about Newport and the Second World War. In 1939 during World War II he was a Fire Warden and was based in the college on night shifts. One night whilst on duty a Dornier came up the channel dropping sea mines in a row and one landed in Chepstow Road where Stanley lived and blew him off his feet. He was still in Newport when the Heinkel crashed into the Phillips family home on the night of 13th September 1940. It was the first enemy aeroplane to be brought down by an anti-craft barrage balloon in Britain.Tragically, two children in the house, Myrtle and Malcolm Phillips, were killed. (see post below)

Stanley Lewis was commissioned to paint a picture depicting wartime Newport and he hung the huge canvas in the art college. In it he sketched the incident of the 13th September and he included various bits of equipment that was brought over to the college for him to sketch and he used students as his models. However, sadly the work was uncompleted as he was called up. After the war he became principle of Carmarthen School of Art where he taught until his retirement in 1967.

The photograph below is of the twisted remains of a propeller from the Heinkel bomber, which crashed into the Phillip's home. The propeller was recovered by Flight Lieutenant Clifford North who was stationed locally during WW2 and was amongst the first on the scene. He took the propeller as a memento and it ended up in his garage.  His family have donated it to Newport Museum and it is displayed under the Stanley Lewis's 'Home Front' painting in Newport Museum and Art Gallery. 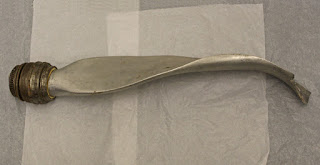 Another item that in the Museum collection with a connection is this World War Two finger ring. Such souvenirs were fairly common in the Second World War, with the proceeds from their sale going to the families of the bereaved or the war effort in general. The bezel of the ring is inscribed: ‘M.P’  ̶  the initials of Malcolm and Myrtle Phillips, who died when the bomber crashed into their home. On the inside of the ring it says, 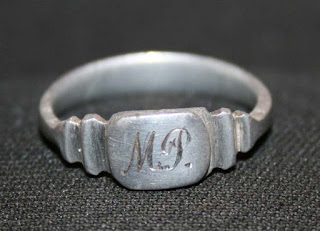 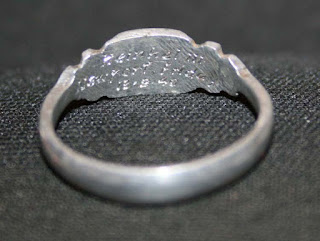 See previous post for information as to how the painting 'Home Front' was rediscovered.
See also https://www.southwalesargus.co.uk/news/13408747.read-how-a-german-heinkel-bomber-crashed-on-stow-park-avenue-in-newport-destroying-a-house-and-killing-two-teenagers/