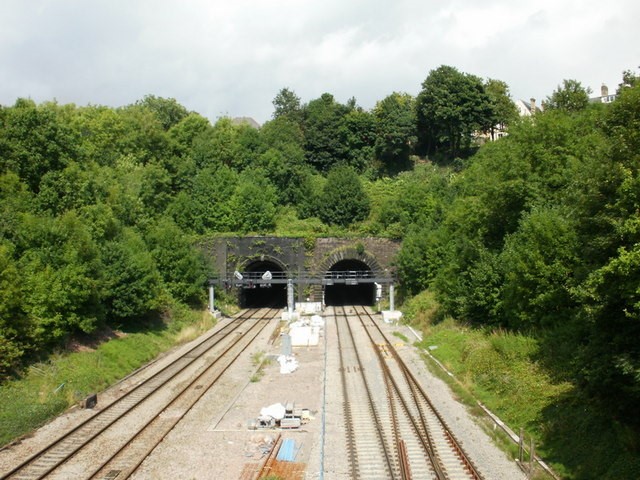 In September 2017 Network Rail published a document entitled ‘Newport Old Tunnel Heritage Impact Statement’. It was in support of the planned works that were going to take place in the tunnels during the electrification of the railway line from London to Cardiff. There are two tunnels which have had various names but in the picture above they are called the Hillfield tunnels. They are also known and the ‘old’ and ‘new’ tunnels. The Grade II listed old tunnel was of concern during electrification but also there were a large number of buildings, 200 feet above, which were potentially at risk of damage during the proposed work. I had a particular interest in this as the tunnels run directly under my home, and my house bears the scars of its 170 year’s existence.

It is strange to think that the Monmouthshire Merlin in 1837 recorded that that there was no need for a railway. It stated,

The proposed railway is uncalled for and unnecessary there being for its maintenance merely the travelling and carrying which is barely sufficient to support on the road two mail coaches and four stage wagons.

However, at this time freight was largely transported by water – by coast, navigable rivers or canal. The development of railways saw huge changes in people’s lives and demanded great feats of construction. At Newport it involved digging a tunnel under Stow Hill. It was an ambitious project designed by the architect and chief engineer of the Great Western Railway (GWR), Isambard Kingdom Brunel. However, it also brought problems for the town as unfortunately the construction of the tunnel had the effect of draining many of the springs and wells which ran dry and a newly discovered well in Clifton Road became redundant.

In 1848 Rennie and Logan won the tender to construct the section between Maindee and the River Ebbw. Work began immediately on the proposed new 770 yard tunnel under Stow Hill. At either end two great shafts were sunk with over 400 labourers and some 50 horses working on the project. Initially all the spoil was brought up and spread around the surface immediately adjacent to both shafts. Once the new bridge across the River Usk was finished the waste was transported by horse drawn trains to the other side of the river. It was used to form new railway embankments.These can be seen below in J. F. Mullock’s, 1860 print of Newport viewed from Summerhill in Maindee. You can see the train making its way across the flat terrain travelling left to right on its way to Chepstow across the embankment. 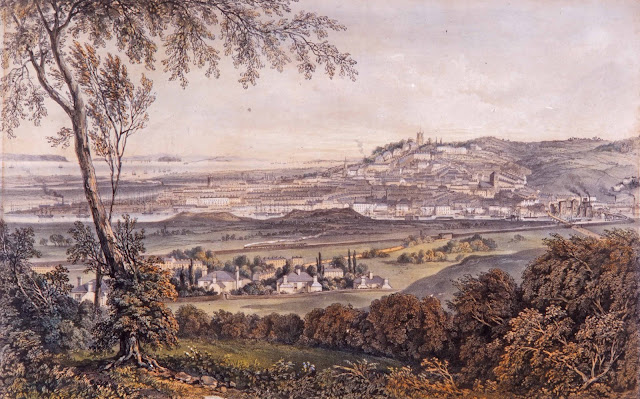 © Newport Museum and Art Gallery
Below is a view of the embankment as it went through Newport at Clarence Place. As this picture shows, the embankment had to be cut through and bridged to allow the road to pass through. 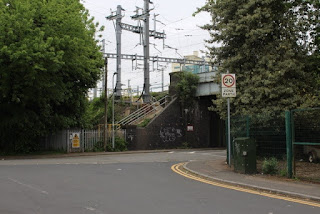 With work completed, the new broad gauged line from Chepstow to Swansea opened on the 18th June 1850. When the first steam train entered Newport, Brunel, stood on the footplate and gave a few blasts on the steam whistle as it entered the new station. Aboard the train travelling from Chepstow was a Monmouthshire Merlin reporter. His feature published on 22nd June 1850, described the excitement of the journey. Having stopped at Newport and picked up the dignitaries it headed on towards the tunnel.

We find ourselves rushing through the first, and, indeed, only tunnel on the line! Those who are adventurous enough instantly to peep out, declare that they can clearly see the eye of the tunnel at the other end; and whilst they are expatiating on passing through a tube under a long hill, (what would their ancestors have thought of such an undertaking.

At first the line went to Cheltenham and the South Wales Railway paid a rent to the GWR for rolling stock and locomotives, but there was friction and in 1861 they agreed to merge but the different gauges, standard and broad, caused problems. In 1872 the GWR converted to the standard gauge. In 1886 the Severn Tunnel was completed and so the journey to London only took 5 hours 30 minutes.

Demand was such that today two tunnels run under the hill. In 1910-11 increased traffic caused a new tunnel to be constructed and it was longer than the first 1848 tunnel. The railway viaduct over the River Usk was widened due to the increase in traffic, firstly in 1911 and then replaced to allow a 4 track crossing in 1925. The original 1848 tunnel has survived largely unchanged and for this reason is an important structure. Today the old tunnel takes mainly freight while the new tunnel is usually used for passengers. Newport Old Tunnel was listed as Grade II in March 2000 and referred to as ‘Stow Hill Railway Tunnel’. It is important because it was an ambitious project which allowed the main line to be routed through the centre of Newport. Furthermore the tunnel portals still display characteristic architectural design as completed by Brunel c.1848-50.

See Newport Past for the opening of the railway.
http://www.newportpast.com/nfs/y50t59/chapter4.htm